Lone Tree City Council has unanimously approved the addition of six outdoor concrete pickleball courts and a few other amenities to the Lone Tree Recreation Center.

This item is available in full to subscribers.

Our print publications are advertiser supported. For those wishing to access our content online, we have implemented a small charge so we may continue to provide our valued readers and community with unique, high quality local content. Thank you for supporting your local newspaper.

Lone Tree City Council unanimously approved the addition of six outdoor concrete pickleball courts and a few other amenities to the Lone Tree Recreation Center, located at 10249 RidgeGate Circle, during its meeting Aug. 2.

“This is something that residents have been asking for, for a long time,” said Councilmember Mike Anderson. “We look forward to making this available to people in the neighborhood and the region.”

The pickleball courts will be added near the southeast corner of the recreation center, south of the parking lot. In addition to the courts, other amenities are also part of the project, including developing two ADA pedestrian connections to the courts, a shade pavilion, picnic tables and bike racks.

The project is a collaboration between the South Suburban Parks and Recreation District and the City of Lone Tree, according to the city’s website. The Planning Commission unanimously recommended approval of the proposal, and Ian Corder, an associate planner for Lone Tree, said the city did not receive any negative comments about the proposed project.

To develop the project, the amount of parking spaces at Lone Tree Recreation Center will be reduced from its current 202 spaces to 185, said Melissa Reese-Thacker, the planning manager for South Suburban Parks and Recreation District. This number is still higher than the city’s required amount of parking for the recreation center, which is 181 spaces.

“We’re really building in a very tight configuration,” Reese-Thacker said, explaining that part of the reason for removing those spaces is because there is a nearby high-pressure gas line, a utility easement and water easement near the proposed development. 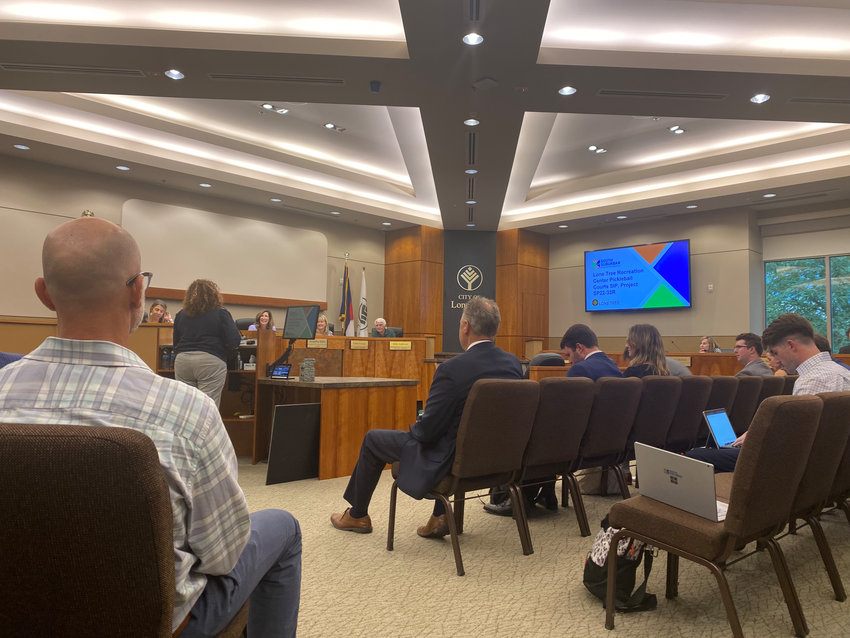 A retaining wall will also be built on the property. According to the city staff’s report on the project, there is a prominent slope that extends from the nearby street, Crossington Way, to the parking lot. To address this, a ledgestone retaining wall ranging from 6 feet to 8 feet tall will be built around a portion of the development, and an approximately 48-inch split rail cedar fence will be at the top of the retaining wall, according to the staff report.

“The orientation of the development and the retaining walls provide natural sound mitigation,” Corder said.

If additional sound mitigation is later needed, according to the staff report, the city can also require the installation of “black sound dampening material.” Reese-Thacker said a black chain link fence will be installed around the perimeter of the courts, and this fence is designed to support acoustic panels, should the city decide they are needed.

To light the pickleball courts, there will be LED light fixtures for each of the six courts that are controlled by a computerized system. On each court, there will be a push button that, when pressed, will turn on that individual court’s lights for one hour.

About five minutes before the hour is up, a 12-foot beacon light located on the court will begin flashing to notify players on the court that the lights are about to turn off, so that players may push the button again to keep the lights on for another hour. There will be a beacon light on each court, making six total, Corder said.

Corder said city code typically prohibits flashing lights, but due to the purpose of the lights and the flashing being temporary, council approved the proposal along with the condition that the community development director gives final review and approval of the lights.

Councilmembers asked for further clarification about the winter operations of the court. Reese-Thacker said that if courts are clear, they will be open. However, due to the retaining wall, there is a concern that a shadow will be cast that could prolong the amount of time ice and snow is on the courts, which would prolong closure. The courts also cannot be shoveled, because it is easy to damage them, she said.

“Thank you for the solid design,” Anderson said. “Really appreciate the collaboration between South Suburban and city staff in terms of working with a tough site.”

Mayor Jackie Millet said council looks forward to learning more about what the project schedule is and when construction may begin. According to the staff report, the anticipated opening date is spring of 2023.

Other items that may interest you

Acosta, Brighton police commander, dies
Former Brighton Police Department Cmdr. Frank Acosta passed away of natural causes, the city announced Sept. 23. Acosta joined the police department in February 2000. Before that, he was a state …
Classes continue at Fort Lupton High School despite circulated threats
The Weld Re-8 School District became the latest in a series of school districts to face rumored threats to school safety.   In a district website post Sept. 23, Weld Re-8 Superintendent …
State introduces the new Office of Civil and Forensic Mental Health
The Colorado Department of Human Services (CDHS) announced that the Office of Civil and Forensic Mental Health (OCFMH) is the new name for the former Office of Behavioral Health (OBH).

Suspect injured in train crash with squad car
It started as a reported menacing with a gun  all in Fort Lupton Sept. 16. The initial incident ended with a collision between a train and a squad car in Platteville, and it continued Sept. …

We have noticed you are using an ad blocking plugin in your browser.

The revenue we receive from our advertisers helps make this site possible. We request you whitelist our site.